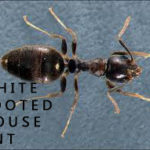 " bits of ants keep on falling from light fittings- it's so annoying..."

The ant you have is good at house keeping?!?!? What the?

The annoying bits of  "small black stuff or dust" is the ants nest dumping dead ants away from the nest. Or "house keeping". This ant deems a dead ant in the nest  as "toxic" and  specialized "dumper ants" take the dead ant  away from the nest and dump it.  Commonly this makes a pile of  black "dust" and bits of ants. This can very annoying when it falls on a bed, sofa  or kitchen bench top.

White-footed ants get their common name from their very light-colored feet. The white footed house ant name is a little misleading. It's just a black ant. It gets is name because it has white hairs on its legs. Under certain lighting it looks like it has "white feet". But to the average punter it's just another black ant.  Mature colonies can range from 8,000 to 3 million individuals, with as many as 33 percent being reproductive.

White-footed ants prefer to feed on honeydew and nectar from plants but sometimes invade homes in search of sweet liquids and water. Unlike most ants, foraging white-footed ants do not share their food with other ants. Instead, many of the sterile workers in the colony lay eggs, called trophic eggs, which serve as the food source for the larvae and the non-foraging adults and most importantly for  the Queen (s).

White-footed ants infest both urban and rural habitats, as they spread to other areas through commerce, such as nursery stock and shipping containers. Preferred nesting sites are near moisture and food sources that also provide protection from predators and harsh environmental conditions. Outdoors, this type of ant can likes to nest in moist microenvironments, including under loose bark or rocks, in decaying tree trunks and branches, and in old termite galleries. In homes, white-footed ants can be found nesting in wall voids, attics, under roof shingles, around skylights, and in kitchens and bathrooms.

White-footed ants don't have a stinger and do not cause any structural damage. However, they can become a nuisance if they find a way inside the home.

Originally from Queensland, this ant arrived in New Zealand in the Port of Nelson in 1962. This ant prefers to live inside man made structures such as walls, ceiling spaces and window frames. It likes it warm and dry and if typically found around windows and doorways on the North Western side of a building.  As their nest is remote inside a structure it  makes it  difficult access.

Further they don't bait well, as the Queen is fed exclusively by specialized ants, meaning your DIY bait  never gets to the queen. In fact your DIY bait kills off the older ants making the nest younger and stronger. As a result customers state that after their baiting efforts small back ants started appearing. These are the same ants, just the younger ants  coming out of the nest, as your bait  got rid of the older ants.

What ACES pest control does

We tailor our method to this species of ant. We also use our "transfer " products from the USA and Germany  to get chemicals into the colony and destroy the nest. And yes the dumping does stop too!

Want to be rid of these ants? Get in contact with ACES | ants we will  give you a GREAT   result.