Argentine ants NZ  are notoriously difficult to control and are a major household and garden pest. Native to South America this species of ant  is a honey brown ant  species  have an unusual biology. Their colonies of HUGE NUMBERS  consist of several thousand invasive species of workers and multiple queens. Mostly the ant workers from different colonies are not aggressive toward each other, allowing them to form a large super colony, often linked by dense thick "honey" brown  trails of ants. Argentine ant nests are dispersed, but typically located in DRY areas of garden soil  near a food source. While they will take sugar rich foods BUT their preference of  food sources is  fats and proteins.

Found throughout New Zealand the  worker ant Argentine ants can be very aggressive and invasive  towards other small arthropods and insects, often impacting other ant species in the areas they colonize. This can make them a major garden and household pest, causing a major pest insect issue in huge numbers.

The colonies are mobile and relocate to more acceptable nesting locations whenever necessary. In some areas, they congregate in communal overwintering sites during colder months. Even if Argentine ants would not nest inside structures, the workers are very good at finding food sources  and building materials  for their colony  quickly establishing foraging trails.

The Argentine ant NZ is a medium sized brown ant. They can often turn up in mass one day, with thick streams of ants coming into the house from the garden soil. Commonly they trail on walls or upper skirtings as well the floor. Then the next day they can vanish leaving the customer wondering what is going on. Customers also tell us that the Argentine ant can bite and can feel a nip when doing the gardening or sitting on a outside seat.

This ant nests most commonly outside, and prefers dry and warm areas such as retaining walls or pot plants and under garden weed  mats.

The Argentine ant can form super colonies. The biggest super colony in the world is the Argentine ant NZ in Europe. Scientists have looked at the genome of the Argentine ants on the coast of  northern France. The genome extends south past Spain, around the Mediterranean coast all the way to Italy. All ONE NEST! In NZ all the Argentine ants NZ we have are all a very similar genome, which allows nests cooperate not be in conflict with each other. This means if a customer has three small nests around their house, they will cooperate to form one SUPER COLONY! Giving the customer rather  big  "headache".

Sometimes this invasive ant with its huge numbers and thick streams of ants  can surround a house and cause the black ants in the walls to run away. Unfortunately there’s no escape and suddenly customers see large masses of black ants on the walls/book shelves inside their home. This is caused by the Argentine ants following the black ants trails and upsetting them.

They are very aggressive feeders and as the nest gets bigger they need more and more food sources.  We use this ants aggressive  nature against them by using  baits it really likes. This ant shares {trophallaxis)  food ( and our special bait)  with other ants in the colony. The combination of ant ants' aggressive foraging and the products we use the colony is decimated.

At ACES we are passionate about bugs, and have this "South American Ants"  number, contact ACES ants so we can give you a GREAT result. 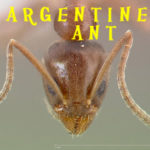