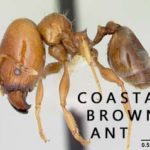 "Always in the dishwasher and the cat food!    Arrrgh! "

This ant can be persistent!  And when you decide to do something about it the expensive DIY products you buy don't to work!

Coastal brown ants also known as big-headed ants is a very successful invasive species and is considered a danger to native ants in Auckland. It has been nominated as one of the hundred ‘World's Worst’ invaders.

There are two types of worker ant, the major or soldier ant and the minor worker also called Bimorphic ( two sizes). The common name of bigheaded ant derives from the soldier's disproportionately large head. This has large mandibles, which is commonly used to crush seeds other small items. The soldiers are about four mm in length, twice as long as the minor workers. The colour of both types varies from yellowish-brown or reddish-brown to nearly black.

Fats and oils primarily and proteins as secondary.

Big headed ants nest in colonies underground. Infrequently they are found inside houses.  Colonies can have several queens and super-colonies can be formed by budding; when a queen coastal brown ant and workers leave the original nest and set up a new colony nearby without swarming. In America, for example, nuptial flights of winged ants take place during the winter and spring and afterwards, fertilized queens shed their wings and find a suitable site to create a new colony where they start laying eggs. Each queen lays up to 290 eggs per month. The eggs hatch after two to four weeks and the legless white larvae, which are fed by the workers, pupate about a month later. The adult workers emerge ten to 20 days after that.

The bigheaded ants feed on dead insects, small invertebrates and honeydew excreted by insects such as aphids, soft scale insects, mealybugs, whiteflies and planthoppers. These sap-sucking bugs thrive in the presence of bigheaded ants, being more abundant on plants patrolled by ants than on those not so patrolled. These ants trail into houses and can create tunnels of sand to protect the workers as the move into and out of  your house.

The coastal brown ant can be found nesting in disturbed soils, lawns, flowerbeds, under objects, such as bricks, cement slabs, or flower pots, around trees or water pipes, along the base of structures, and walkways, where displaced soil is usually forms sand mounds.

The Coastal Brown ant is found in areas of Auckland where the ground is sandy, common in Onehunga, Northcote,  Herne Bay, Freemans Bay and other areas of Auckland.  They have an interesting habit of eating grout in bathrooms! They reuse the grout in building their nest.   These guys can come out of your kitchen sink and shower seemingly from nowhere!

The coastal brown ant does not sting or cause any structural damage, and usually does not bite unless the nest is disturbed, and even then, the bite is not painful.  More often these ants leave piles of loose sandy soil. Homeowners are often annoyed by these ‘dirt piles’ and by ants foraging in bathrooms, kitchens, around doors, and windows, as well as on exterior paved or brick walkways or driveways. Their attraction to food also causes annoyance within populated areas.

The most effective treatment is to use oil-based granular  baits. The ants collect the small particles and take them back to their numerous nests where complete control of the colony can be achieved. We use a bait that is in a granular form which works extremely well. Why? Because ants don't have mouth parts ( just a tube) and need to feed on liquids. So when they are given granular bait they can't eat it themselves and HAVE to feed it to the colony. We also use other products along with the granular bait that have a transfer property. Meaning the colony gets the full impact of our high quality products from Germany and USA. Total decimation!

Coastal brown ants driving you crazy? Get in contact with ACES | ants and you will soon be ant free